What States Require EPCS & How Your Practice Can Stay Compliant

With the ongoing abuse of opioids across the country, certain states have begun establishing mandates around Electronic Prescriptions for Controlled Substances (EPCS). These new security and tracking requirements aim to help deter the misuse of opioid prescriptions that have led to the persistent and tragic number of overdoses affecting the country.

For health practitioners, it’s essential to know if EPCS regulations are already in effect for your state or if the deadline for such policies is on the horizon. 2021 marks another significant milestone for EPCS. As of January, a federal EPCS requirement for Medicare Part D drugs is now in effect. Due to the pandemic however, CMS has stated they will not enforce the requirement until January 1, 2022.

Beyond that, however, four more states are already joining the list of states with general EPCS requirements before the end of 2021. Then another three will make the change at the beginning of 2022.

Note that some states temporarily waived their scheduled mandates, allowing practitioners to focus on the ongoing pandemic. If you are unsure about your requirements, you can check for the latest changes directly with your state pharmacy board. 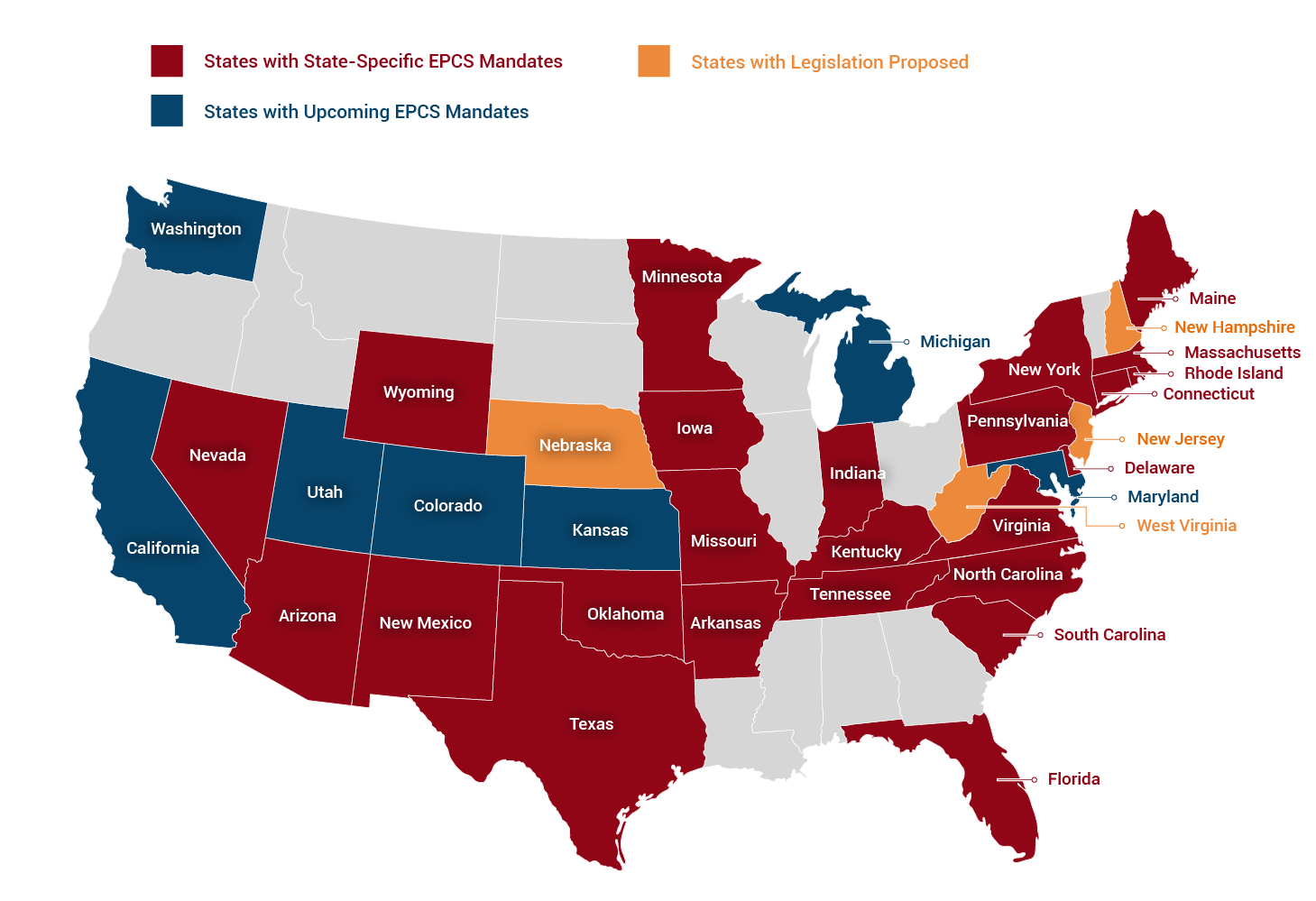 What Are EPCS Compliance Requirements?

EPCS legislation began in earnest as recently as 2016 when New York became the first state to enforce such a policy. The first federal mandate did not take effect until October 2018, with the signing of the SUPPORT for Patients and Communities Act.

The law included an electronic prescription standard for all controlled substances listed under Medicare Part D drugs. It also instituted a deadline for states to establish their own EPCS standards by January 1, 2021.

Since then, the number of states with EPCS regulations has risen to 24, with seven more lined up for future enactment and four with legislation pending.

The U.S. Drug Enforcement Agency (DEA) has provided a set of EPCS compliance guidelines for providers, vendors, and pharmacies to follow. Such a system must include:

EPCS regulations have gained popularity due to the strict safety measures for both patients and practitioners. Part of the continued success, however, comes from the growth of tracking mechanisms surrounding prescription drugs.

If you’re a healthcare provider with the ability to prescribe controlled substances, we highly recommended you apply for PDMP access immediately via your state’s government website. You’ll be able to view patient prescription histories and medication disbursement, which can help inform your future prescription choices.

EHRs Can Improve EPCS and PDMP for Your Practice

For heightened efficiency and effectiveness when it comes to prescription drug mandates, your EHR can play a vital role. Ask your EHR or EMR provider if your system supports EPCS compliance integration and can connect with PDMP management. Ensuring your electronic health records include the security functionality you need can go a long way towards making it easier to remain in compliance with state regulations.

Meditab’s own Intelligent Medical Software (IMS) platform offers full EPCS and PDMP support and integration, alongside an EHR and practice management system. Various reports are available in IMS to monitor the prescription of controlled substances, and IMS has a hard token and soft token authentication mechanism for added security.

If your practice needs to update to EPCS, it’s not too late.

Disclaimer: This post was originally published in October of 2019 and has been updated to include the latest dates and relevant details. The information contained on this website is for general information purposes only. Readers should review their state pharmacy board website for the most current and accurate information.

How Is the Pandemic Changing Primary Care? Dr. Aarti Kapur: Championing Collaborative Care For Her Community